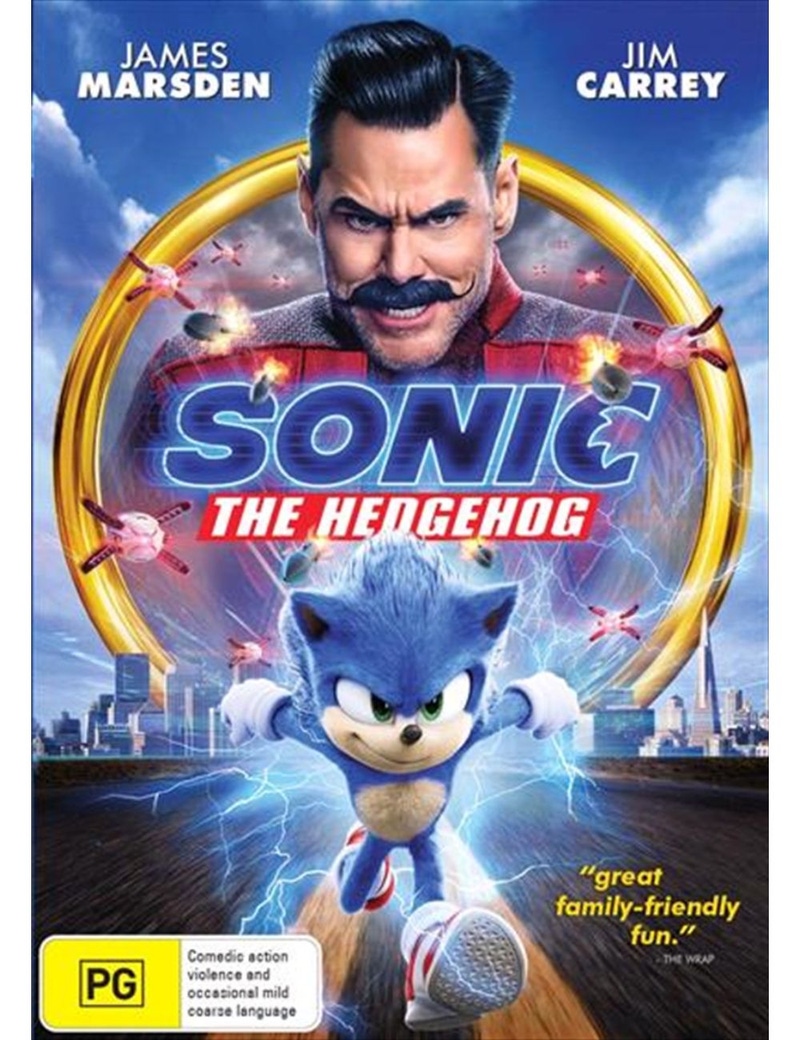 After discovering a small, blue, fast hedgehog, a small-town police officer must help it defeat an evil genius who wants to do experiments on it. Based on the global blockbuster videogame franchise from Sega, Sonic the Hedgehog tells the story of the worlds speediest hedgehog as he embraces his new home on Earth. In this live-action adventure comedy, Sonic and his new best friend team up to defend the planet from the evil genius Dr. Robotnik and his plans for world domination.

Review of Sonic The Hedgehog by Peter Walkden

Based on the well-known videogame character, thanks to Sega. Sonic lives a peaceful life within his homeworld until the hero himself becomes in danger. The only way to be kept safe and stay alive is to use one of his magical rings which allows him to a new dimension. Sonic ends up on a strange dimension known as Earth.

Sonic is now all alone and lives in a cave. Daily entertains himself busy exercising, reading books, playing games or watches the lives of others including the town’s local police officer Tom (James Marsden). He lives close by near Sonic’s home. But it isn’t long until Sonic is in danger once again. Sonic mistakenly uses one of his superpowers which alerts the government of the unusual activity. This then leads an evil scientist by the name of Dr Robotnik (Jim Carrey) to hunt down Sonic and learn more about the superhero’s abilities. Sonic tries to in hiding in the same home that Tom lives in but naturally gets discovered. Now both Tom and Sonic go on the run and must together.

I have fond memories of playing Sonic The Hedgehog as a child thanks to a stunning Sega Master System II Console. While I was not always playing every Sonic that got released, I am amazed at how much I do still remember and how much of it was relevant in this film. Talking about the suburb of Green Hill is just one of many nods to the original game.

The voice work of Sonic (voiced by Ben Schwartz) was fitting and enjoyable. I am also one of those people who was rather thankful that Paramount redesigned Sonic’s look when comparing to the 1st trailer in which fans were not pleased to see. Paramounts hard work and extra spendings have paid off when it comes to the CGI. This will be pleasing to many fans who have always loved the little blue guy.

The most enjoyable element to Sonic The Hedgehog was the film’s villain of Dr Robotnik (Jim Carrey). Actor Jim Carry gives a familiar but still a welcoming performance as the evil scientist aka the bad guy. It is great to see the actor be over the top with his random one-liners and strange looks while he hunts for Sonic The Hedgehog.

Overall, Sonic The Hedgehog is a fun, entertaining and brainless comedy time which takes its audiences down memory lane. In my opinion, it is genuinely a video game film that has been done right. Visual effects and sound design were also pleasing too. Easily the most fun element of this film comes from the actor Jim Carrey who brings a familiar and yet welcoming performance as the film villain.

Review of Sonic The Hedgehog by Christopher Pattison

‘Sonic The Hedgehog’ the movie became the most talked about film in 2019 and it wasn’t even released in 2019… The controversial trailer of the film was released that showed an obscure and divisive design of the title character that really got fans talking and not in a good way. The film went through massive re-edits with the entire film being re-rendered to feature the classic design of the character that fans know and love. This re-design worked in the favour for the film as it ended up being a huge box office success. Was the film worth all the discussion and worth the money spent to re-design the character?

It is safe to say that it was. In a world where we have not really ever received a good adaptation of a video game, ‘Sonic: The Hedgehog’ stands above the crowd as a fun, energetic and enjoyable family film with heart, strong characters and fun visuals that has something for all ages. Our title character ‘Sonic’ is played by the always charming Ben Schwartz, he lends his voice to the character for great comedic effect. Schwartz makes the character endlessly likeable, which is always hard to do especially when it is a fully computer-generated character. I found him really enjoyable in the role. Jim Carrey is also great in the film. He is funny, over-the-top and energetic, it is the best he has been in quite some time and it is great seeing him play a character like this with this much energy again. James Marsden rounds out the cast as Tom, Sonic’s sidekick for his adventure and he is likeable in the role as well, proving once again he is the man for the job when it comes to working with CGI critters (in 2011’s Hop).

For fans of the video games, there are plenty of references, with little Easter eggs sprinkled throughout to keep fans satisfied. The CGI effects are notably cartoonish, but this was definitely the right decision, it makes the world of Sonic feel more fun and in tone with the video games. There are some creative action set pieces, with a great sequence in a bar with Sonic moving faster than light itself to end a bar brawl. It was great and had me laughing quite a bit. On that note, the humour is also used well in the film. It never feels out of place and adds to a lot of the films more creative sequences. The banter between Jim Carrey and James Marsden is great, there is a sequence with the two of them delivering quips and insults in a very sarcastic manner one after the other and it was great. ‘Sonic: The Hedgehog’ was a pleasant surprise. With likeable characters a fun premise and colourful and creative set pieces, there is something in here for every viewer. I cannot wait to see more outings with this cast of characters. I am giving ‘Sonic: The Hedgehog’ a 7/10. Look for this one on Blu-Ray & 4K UHD today!

Chris has written this movie review for Sanity. See more from Chris here