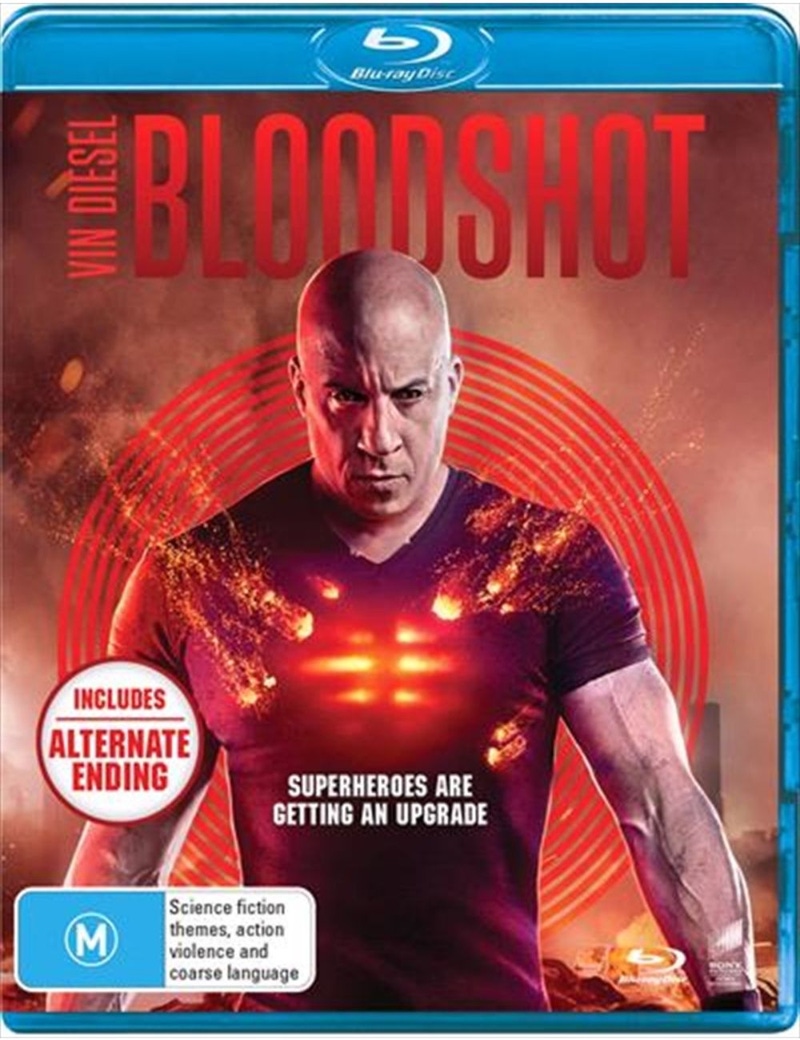 You Don't Need a Past to Have a Future

Ray Garrison, a slain soldier, is re-animated with superpowers. After he and his wife are murdered, marine Ray Garrison is resurrected by a team of scientists. Enhanced with nanotechnology, he becomes a superhuman, biotech killing machine'Bloodshot'. As Ray first trains with fellow super-soldiers, he cannot recall anything from his former life. But when his memories flood back and he remembers the man that killed both him and his wife, he breaks out of the facility to get revenge, only to discover that there's more to the conspiracy than he thought.

Review of Bloodshot by Peter Walkden

Ray Garrison (Vin Diesel) is a soldier who returns home to his loving wife. Life seems too good to be true, and it is only enjoyed for a short duration. Ray’s wife is captured, murdered and Ray himself is killed. But! After this tragedy, Ray wakes up in a lab with a completely changed body. His body has been donated to science. Upon waking up, Ray is advised of his current situation. We also know that Ray is now all alone and does not even have family who will miss him. But now he has new abilities which have never been seen before. These abilities include Ray being able to selfheal and incredible strength, all thanks to the latest advancement in technology. With this new body, Ray has been given a second chance and begins his new life by seeking revenge on the man who killed his wife.

For those who are not aware, Bloodshot is one of the first films based on a Valiant Comic. In case you are wondering, Bloodshot differs from the standard Marvel, DC or general superhero story.

One element that I did appreciate in Bloodshot was the film’s visuals and special effects. Seeing flesh shot come off someone and see it all reconnect was fun during action sequences. There are effects here that take away from realism by turning characters into full CGI, making this film look more like a video game.

Overall, Bloodshot has an appealing setup, and it’s loaded with brainless action sequences. Outcomes for the leading man at times may seem predictable, but in the end, it’s still an entertaining film.

Review of Bloodshot by Christopher Pattison

Vin Diesel has proved himself as an action star with currently three running action franchises: ‘Riddick’, ‘XXX’ and of course ‘The Fast & The Furious’. Vin Diesel’s brand of stoic action hero has pleased fans now for decades and here he flexes that action muscle once again with ‘Bloodshot’. ‘Bloodshot’ was the last major cinematic release of the 2020 movie season before cinemas closed due to COVID-19, experiencing a shortened run in cinemas. Unfortunately, I did not get to see this one in the cinemas and I am really disappointed in that because this movie is a lot of fun and I had a great time watching it!
‘Bloodshot’ once again proves that Vin Diesel, whilst not a great actor, he is still a likeable star and carries ‘Bloodshot’ as another action-vehicle. Based on the popular comic book series, the film follows Ray Garrison aka Bloodshot (played by Vin Diesel) who after killed in battle is re-animated as Bloodshot, a super-enhanced human, designed to kill. The premise is something we have seen many times before, ‘Robocop’ and even more recently in Leigh Whannell’s ‘Upgrade’, but what ‘Bloodshot’ manages to do differently is amp up the action and the premise to a more light-hearted and fun approach, which makes the film feel fresh and different from other films that are similar thematically and in its premise. Vin Diesel is a lot of fun in the role, delivering his patented deep, raspy voice that we have come to expect from him. You can tell he is having a lot of fun with the character and it is good to see him star in a film that plays to his strengths as a performer. Guy Pearce also shows up as the scientist that assists with the re-animation of Garrison. He delivers a campy and over-the-top performance as well, which adds to the fun tone of the film. Toby Kebbell also shows up briefly during the film as well as one of the film's antagonists. He has a great sequence of him dancing to psycho, killer by ‘Talking Head’ in a meat locker. It is amazing. The CGI is quite impressive as well, with sequences where the VFX recreate Vin Diesel's character entirely and show the nanobots re-generating his skin as he is injured in combat. I found these sequences to be quite impressive, as visually they were unique and different. The action set pieces are a lot of fun as well, with large-scaled action sequences providing some fun and inventive sequences. Bloodshot was an enjoyable experience, it was fun and easy to watch, and overall entertaining. There are not enough of these types of blockbuster films anymore and it was refreshing to see one that does not take itself overly seriously and has fun with the campy, over-the-top tone. Check this one out if you get the chance!

Chris has written this movie review for Sanity. See more from Chris here