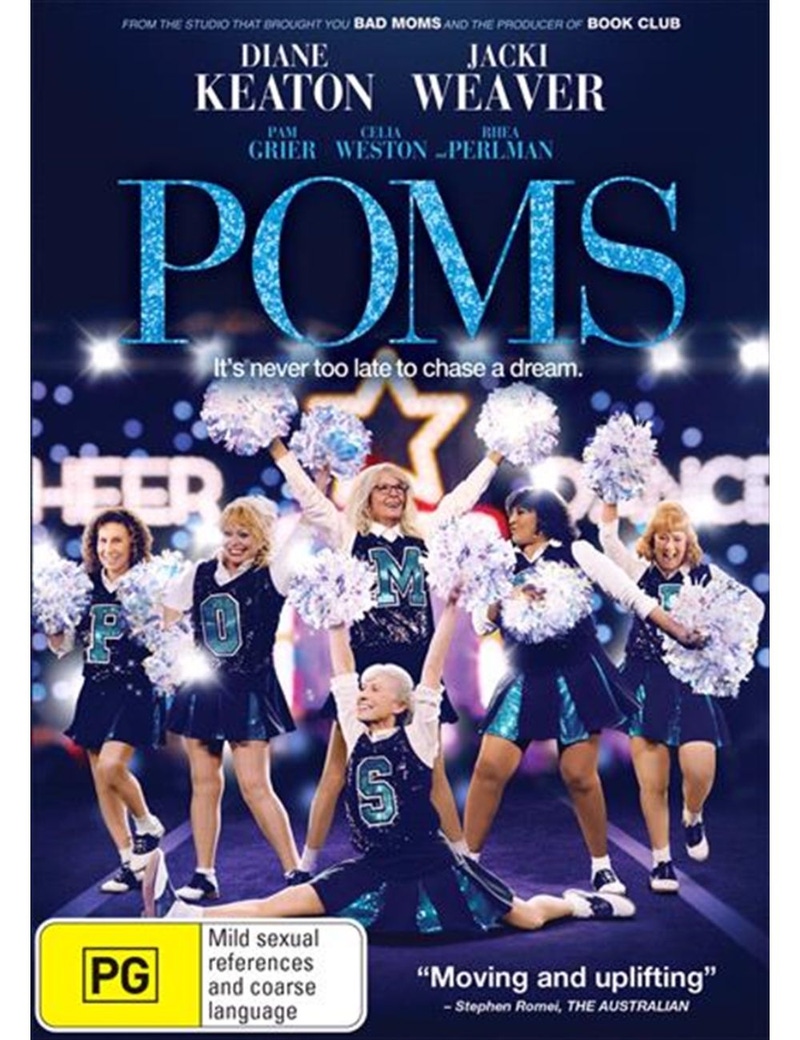 It's never too late to chase a dream

Just 45 minutes outside of Phoenix, Arizona, lies the picture-perfect retirement community of Sun City. Its a place where palm trees line the streets, the skies are always clear and the Sun City taxi (the residents name for the ambulance) drives by two or three times a day a final destination for retirees to live out their golden years in comfort. From this unlikely setting come the Sun City Poms, Americas first cheerleading squad for women aged over 60. This is their story. POMS has all the tantrums, triumphs and mind-boggling dance moves youd expect from an all-American cheerleading film. But beyond the bright lipstick and razzle dazzle we see something more unique and delightful: women in their 60s, 70s and 80s shaking their thing. Its a darkly comedic, life-affirming tale of mortality and ageing, cut to a foot-stomping soundtrack.

Review of Poms by Peter Walkden

Martha (Diane Lane) moves into an active retirement community due to an illness. Deciding to keep the news about her health to herself, Martha soon connects with the other older ladies in the community and forms a cheerleading group. Naturally, there are individual tryouts as the cheer squad comes together. Our leading ladies also decide to enter a competition, taking on the next generation of cheerleaders as a challenge.
Performances are lovely, and Poms is featured with great some great and talented actress including Diane Keaton, Jackie Weaver, Pam Grier, Rhea Perlman and many more.
As a comedy, the jokes here are generally fun and light-hearted with a couple of minor crude jokes that managed to sneak in the film which is also humorous to see. But the film isn't just a comedy. Poms includes many heartfelt moments that I'll confess did manage to pull on my heartstrings.
Overall, Poms it a light-hearted comedy which includes many heartfelt moments that I feel many movies will enjoy seeing even if you're not a fan of cheerleading personally.
Peter has written this movie review for Sanity. See more from Peter here